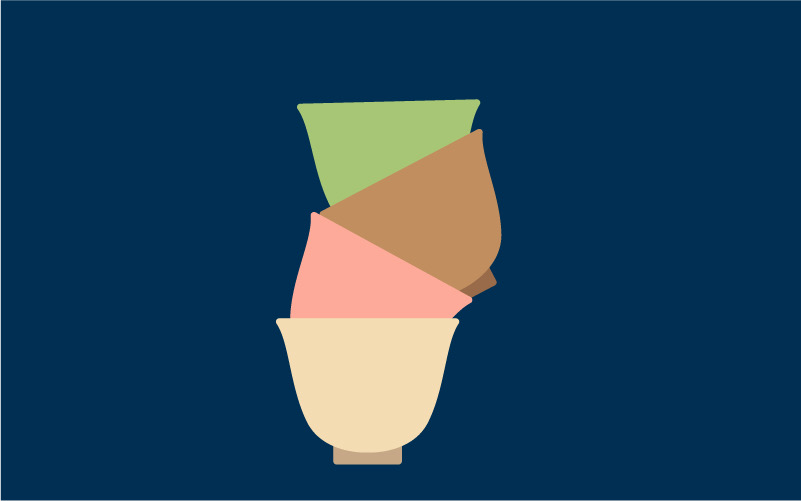 In this post, we are going to introduce the various types of Japanese teas one by one and also share with you a chart that shows the characteristics of each tea type for your reference in choosing your tea.

Before we talk about Japanese tea, the major teas consumed worldwide are black tea, oolong tea, and green tea. Those teas are all made from the same plant in the camellia family called Camellia sinensis.

The difference between those teas is the oxidation level. Soon after being harvested, tea leaves begin to oxidize, which makes their fresh green aroma change into a floral or fruity aroma. Green tea is unoxidized, black tea is fully oxidized, and oolong tea is right in between.

In Japan, more than 99% of tea produced is green tea*. Again, green tea is not oxidized, and there are two methods to stop oxidation: steaming and pan-frying. Typically, steaming is the Japanese style, while pan-frying is the Chinese style. This makes steamed-green tea consist of 99% of Japan’s tea production. Tea leaves for most Japanese green teas are steamed immediately after being harvested, then rolled and dried. *Reference: 全国茶生産団体連合会 令和2年茶種別生産実績

Sencha (or Futsu-Sencha 普通煎茶), is an orthodox type of Japanese green tea. It typically has a fresh green aroma and a well-balanced flavor. Futsu-Sencha and another type of Sencha called Fukamushicha are Japan’s most consumed and popular teas.

To make the vague tea category clearer, Sencha is sometimes divided into light-steamed and deep-steamed Sencha. Light-steamed Sencha, Asamushi-Sencha 浅蒸し煎茶 in Japanese, is yellow or golden, and typically made from the tea leaves grown in the mountains.

Gyokuro is a premium shade-grown tea with an intense umami, savory sweetness. The entire tea garden for Gyoku is covered with reed, rice straw, or black synthetics fiber for 20-30 days prior to the harvest.

What is shade-growing? It’s a tea-producing method to boost tea’s umami content. Certain days before the harvest, farmers cover their tea bushes with reeds, rice straw, or black synthetic fiber to block direct sunlight. That prevents the leaves from theanine (L-theanine, to be more specific), an amino acid that contributes to umami, turning into catechins, polyphenols associated with astringency and bitterness. Shading also gives the tea a unique and pleasant Japanese nori 海苔, seaweed-like aroma called oika 覆い香.

Tencha is another type of shade-grown tea. Ten 碾 means grind, and Cha 茶 means tea. It goes through the same process as Gyokuro until steaming, Immediately after the tea leaves for Tencha are steamed, they are cooled down, the stems and veins are removed, then dried. Tencha is ground into a fine powder, which is called Matcha.

Matcha is ground Tencha, which is a type of shade-grown tea. It’s usually used in tea ceremonies and as ingredients in confectionaries and drinks. There are other types of powdered green tea such as Konacha and Funmatsucha, but Matcha has to be made of Tencha.

Kabusecha is a type of shade-grown tea. Tea bushes for Kabusecha are directly covered by black synthetic fiber for 1-2 weeks before harvesting. It has the fresh aroma of Sencha and umami of Gyokuro.

Bancha is a Sencha made of thick matured leaves plucked between mid-May and November. Bancha usually has a slightly roasted and refreshing fragrance and astringency.

Bancha has another type, which is rare and mostly consumed in the producing regions. It’s typically made from matured leaves, stems, and branches in different regional ways. It tends to have a smoky aroma and little caffeine. Kyo-Bancha from Kyoto and Awa-Bancha from Tokushima are well-known Bancha.

Hojicha is a roasted Bancha or Sencha. It’s naturally sweet and has a toasty aroma. This tea is ideal for relaxing in the evening since it has low caffeine. Also, if you are not used to the grassiness of fresh green tea, this tea is a good option for you.

Kamairicha, pan-fired Tamaryokucha, is another type of Tamaryokucha. This rare tea is made by the Chinese pan-frying method. It has a unique toasty aroma called kamaka 釜香 and a refreshing sweetness. They say Chinese potters brought the pan-frying technique to Kyushu Island, located in the west of Japan. It’s also said that steamed-Tamaryokucha was created by altering Kamairicha for Japanese tastes.

Genmaicha is a blend of Bancha mixed with roasted rice. It has a thick toasty aroma.

Kukicha is a type of demono* 出物 that is made from the tea stems. It has a green aroma and sweet taste, easy to drink.

*Demono 出物 are tea parts removed from the main tea leaves for the final tea products during the tea processing. There is the Japanese word mottainai もったいない, which is the mindset of not being wasteful and can be translated as “what a waste.” So we don’t waste demono, all parts of the harvested tea leaves are turned into different tea after impurities are removed.

Konacha is a powdered demono. It’s dark green, easy to drink, and refreshing. This tea is often served as a complimentary at sushi restaurants, so it may be familiar for some of you.

While black tea from other countries like India and China has acidity and a rich floral or fruit aroma, Japanese black tea called Wakocha 和紅茶 is less astringent and has a natural sweetness. In recent years, the number of Japanese black tea producers has been increasing.

The chart below shows the general characteristics of each type of tea to help you choose your tea.

If you are new to Japanese tea, you should first try Sencha, Fukamushicha, and Hojicha, plus Kabusecha or Gyokuro.

We offer Japanese tea made by eco-friendly, skilled tea artisans. Our teas are not mass-produced and are incredibly nutritious since most of them are plucked in the first harvest of the year. We also have pretty unique teas, not on the list above.

We ship directly from Japan internationally. If you are interested, check out our store from the link below!